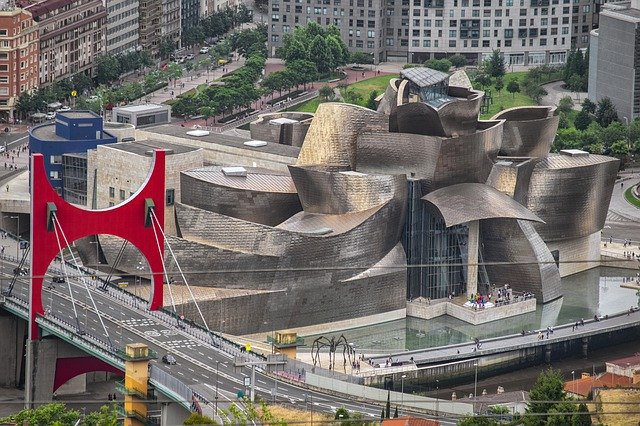 This article is dedicated to Guggenheim Bilbao External exhibition, we will see how the visit to the museum begins before even accessing to its interior.

The visit begins even before to the interior

In fact my recommendation is to start by admiring the outdoor spaces. It is a way of having an overview of Frank Gerhy’s masterpiece. This will allow us a better understanding of the interior of the complexity of the whole.

To all this we must add the set of great sculptures located on the different building facades, all of them of prestigious international artists.

A brief description of each item can guide us before, during or after the visit.

Let’s start with the building itself, which voices much more authoritative than mine, have claimed that it breaks the increasingly diffuse line that separates the architecture from the sculpture.

The building brakes the line between architecture and sculpture

On the closest facade to the urban center of Bilbao, there is the main entrance of the museum and before it “Puppy” a sculpture 12 meters high completely covered by natural flowers that represents a West Highland White Terrier guarding the Museum. The silhouette really corresponds to an adult specimen of this breed.

It is a creation of the American artist Jeff Koons made in 1992. A sculpture that has become an emblem for the museum and a good start in the contemplation of contemporary art.

Jeff Knoos is also the creator of “Los Tulipanes” another sculpture of the exterior exhibition of the museum that we will talk about later. Born in York, Pennsylvania, in 1955 he is therefore American.

Knoos is a sculptor and painter belonging to the stream of conceptual, minimalist and pop art. He is one of the most sought-after artists in his country.

This author is also known for having been convicted of plagiarism on several occasions.

Next to the opposite facade, in the area near the Nervión river, we find “Maman”, created in 1992, a large sculpture 12 meters high, located in the center of the promenade that represents a large spider, in whose abdomen carries the roe of its future offspring, in a clear reference to motherhood.

It is a work of the Franco-American artist Louise Josephine Bourgeois, (1911-2010), French sculptor, nationalized American, known for her spider sculptures.

She worked until the day she passed away at 98.

Josephine was one of the most influential artists of contemporary art. In her works she reflects betrayal, anxiety and loneliness.

Josephine was one of the most influential artists of contemporary art

In the development of her work her personal experiences have been very relevant.

The sculpture is made of bronze, stainless steel and marble.

Lets describe the third work that makes up the external exhibition of the Guggenheim Bilbao. For this we must go to the pond, very close to Maman, also next to the river.

We talking about “The Great Tree and the Eye” created by Anish Kapoor in 2009 and acquired by the museum in 2011.

Its author is a British sculptor, born in Bombay, India in 1954. He is one of the most influential sculptors of his time. He works with cement, stainless steel, stone and other materials. The artist himself defines his work as “incarnations of mythologies.”

He takes great care of the structural aspects of his creations.

The sculpture consists of seventy-three spheres of stainless steel, anchored in three axes forming a complex and harmonious set. It reaches a height of 13 meters.

In the own pond, Ives Klein placed his work “Fountain of Fire” (Fire Fountain). It was created in 1961 and manufactured in 1997.

It is a work not finished during his life. Their concept is a sheet of water on which they dance jets of fire, instead of water.

Has a great visual strength, formed by five aligned fire jets, whose power contrasts with the calm surface of the water. The fire arises at certain intervals of time and harmonizes with the Gehry building.

Fujiko Nakaya’s “Fog Sculpture” from 1998 is also found in the pond itself.

Nakaya is a Japanese artist born in 1933. She was the first to work with the fog in a sculptural creation, which the artist considers a means of transmitting lights and shadows. Her work reflects his creator’s fascination with natural phenomena, which constantly form and disappear.

He created his first fog sculpture at Expo70 in Osaka, for the Pepsi Pavilion.

Nakaya’s work “Fog sculpture” achieves the desired effect by means of a thousand high-pressure nozzles and a pumping system, creating the fog by spraying water.

He has performed fog installations in multiple locations around the world.

Tulips is part of a series called Celebration

“Tulips” is a sculpture that is very close to the previous two, on the terrace of the museum, above the pond and belongs to the aforementioned Jeff Knoos. It is part of a series called Celebration, initiated by the artist in 1994.

It is once again a large sculpture, 5 meters long and 2 meters high, made of stainless steel and color application. The work represents a gigantic bouquet of flowers, seven tulips, whose color resembles children’s balloons.

Daniel Buren was born in France in 1938. He is a conceptual artist. On some occasion his work has been described as abstract minimalism.

Buren’s work, which is part of the group of sculptures that surround the Guggenheim Bilbao, is called “Red Arches” and consists of a creation that covers the structure of the Puente de la Salve. His work brings visibility to the bridge itself, while softening the forms of the infrastructure, integrating it into the architectural complex that surrounds it, the museum itself and the stone tower at the other end. The creation of Buren plays with the reflections in the estuary as a way to complete the geometry of the whole elements.

The work consists of a series of laminated panels, aluminum, steel, PVC, translucent methacrylate, LEDs and projectors, reaching 57 meters high. It was weatherproof and easy to maintain. The sides light up.

Expert court that selected the work in the contest, described it as “visually captivating, simple and impeccable.”

The design of the work required a detailed engineering study that would guarantee the safety of traffic across the bridge, one of the main arteries of access to Bilbao.

As a conclusion to what we could call the external exhibition of the Guggenheim Bilbao, I would like to highlight this initiative, which allows the visit to the museum to begin before even crossing its doors. Visitors can contemplate the unique building while enjoying seven pieces of first level contemporary art. An initiative that beautifies the urban environment of the museum itself and brings art to citizens and visitors.